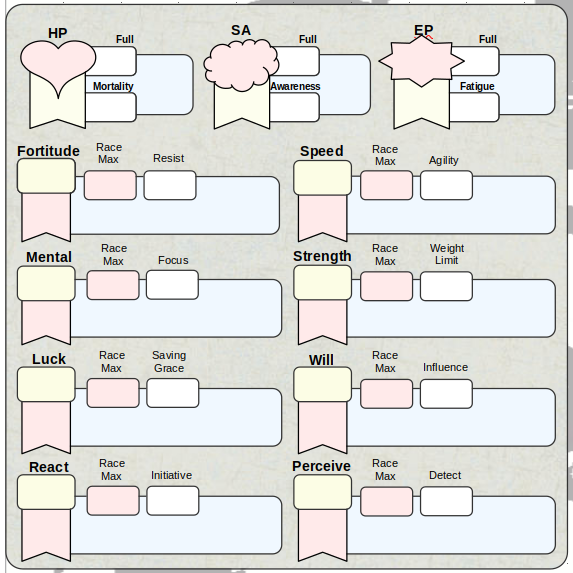 The next step in the character creation process deals with determining your character’s stats. This is a very crucial and important step as these stats will determine your character’s strengths and weaknesses. While the stats will change throughout the game play, the way you set your stats now will determine how well your character can progress and grow in certain areas. Therefore it is very important that you take your time on this step, make sure you understand the process completely, and know how each stat functions. The game master should be present with you when doing this step to ensure that you are following the procedure correctly and to help answer any questions you may have.

It may be a good idea to keep this section bookmarked, and maybe even print off a copy for your character folder. This section will deal not only with generating stats for character creation, but also provide definitions on the various stats and tables that show percentage stats and other derived stat progressions. This section may be one of the sections of this book that you refer to often.

Most players who play this game will already have experience with other role-playing games. Therefore they may think they understand what the stats are and wish to jump ahead with stat generation and rush through the procedure. This is very unwise and could give them a character that does not work the way they wanted the character to. Please note that while some stats may seem familiar, like HP for example, you should take the time to make sure that the stat functions in the same way you are accustomed to in other games. Also there are many stats here that are not present in other game systems and you will want to understand how they function so that you can make the best use of them for your character.

Before continuing on with this important step in character creation, you need to make sure that you have already completed the following steps:

If you have complete the above important steps, then you can safely continue on with this step. If you haven't, then you need to do so now. Otherwise your character's stats will be wrong.

Did you use Character Origins to generate backstory bonuses for your character? If so, you may have additional rolls to add to your point pools! Make sure that you add in those rolls in the point pool generating steps below!

The very first step you will undertake to create stats for your character is to get your initial stats given by your character's profession. They are listed below.

Simply apply the initial stat points listed in the table above to the stat that they fall under, for your profession. You will add to those with your initial stat point pool, and with stat tiles as you grow your character.

Once you have your supplies ready follow these steps to generate your point pool:

Once you have your supplies ready follow these steps to generate your character point pool:

Character Point Rate is a special stat that will show how many character points your character gets whenever he or she succeeds at using a skill.

Your race, profession, runic element, and rolls in Character Origins might give you stats and stat modifiers. If the stat given is listed as a Stat Modifier, than it would go in the Modifiers box, not in the actual stat field. This is important because while stats cannot exceed the Race Maximum, there is no such rule for stat modifiers. Therefore, with stat modifiers, it is possible to exceed race maximums.

Now that you have your point pools generated, it is time to assign stats to your character.

You should not try to balance your character out. While stats themselves can change, balancing your stats will still provide a weaker character that is more difficult to play and one which will become boring to play. Instead you should strive to make your character reflect how you wish to play him or her by giving more stat points to the stats you feel you will use more. You could go based on the race maximums by giving more stat points to the stats that have the highest race maximums if you plan to play to the strengths of your character's race.

While assigning stat points, you may be confused by some of the fields that are available. Here is a quick run down on those fields.