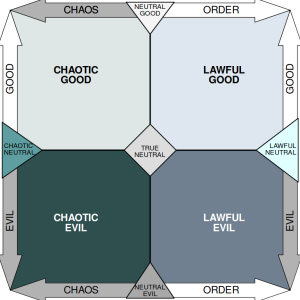 The moral points are better obtained and defined as such:

At first moral points might be easy to work with. After all, you will likely have 0 in all fields, marking your character as True Neutral. However, this is unlikely to last long, because even going out of your way to stay completely neutral could wind you up with moral points. Therefore, understanding how moral points works is very important.

The basics are simple:

However, it is unlikely you will only gain one type of points. Instead you might have light points and chaos points. In that case, you would be chaotic good. For example:

Light and Dark cancel each other out, as does Chaos and Order.

The Neutral Alignments simply mean that you are at least neutral in one aspect of societal living. True Neutral is simply not yet developing an alignment. Neutral Good is having done enough good acts but not enough lawful or chaotic acts. Neutral Evil is having done enough evil acts without obtaining significant order or chaos points. Lawful Neutral is having lived by the law but not having done enough to make you good or evil, while Chaotic Neutral is having shown disregard to laws and standards while not having done enough to make you evil or good. It is very hard to remain in the neutral spectrum, and almost impossible to remain True Neutral. Those with any neutrality are regarded as having low presence or lacking in experience or reputation. To maintain and play a neutral character is to forego roleplaying all together, simply trying to play the system to maintain a lack of alignment.

Chaotic Good: If you are Chaotic Good, that means you are willing to do anything to help your fellow man or to right the wrongs in society. You have little regard for law, and it shows, but you have a great regard for the people. Those who are chaotic good tend to be viewed as heroes by the common man while being scorned by proper society, law enforcement, and authority figures. As such, it is common for a commoner to raise up to help a chaotic good character while that chaotic good character is being watched carefully and judged harshly. It is the chaotic good who will go to war to bring down an evil king or set slaves free.

Lawful Good: If you are Lawful Good, that means you are willing to help out others but you will do so by the letter of the law. Your are more occupied with rules, regulations, and expectations than you are with helping others. Those who are lawful good are the paladins and the city guard, the priests and the good kings. These people are regarded as national heroes and held with great esteem and respect by rulers, peace keepers, high society, and merchants. The common folk might like and appreciate them, however they will never trust them and will often be reluctant to help.

Lawful Evil: If you are Lawful Evil, that means you do what you want, but nothing illegal. You are the kind of person who see's nothing wrong with holding slaves or innocent lives lost in war. Those that are Lawful Evil are perhaps the most dangerous because they aren't going to be proscecuted by the law but can instead use it to their advantage to get what they want. Tyrant kings, crooked merchants, and not-so-holy priests are some of whom are lawful evil. Others might not like them, but a lawful evil person will find little trouble moving about the country side, going into town, or carrying out their buisness.

Just having 1 light point doesn't make you good, nor does  having 1 chaos point make you chaotic. You have to gain enough points to be considered in any alignment. You need to have 10 points to reach an alignment.

Your alignment can also greatly affect your aura, intimidation factor, or charm.

Here is a chart to help determine your aura, intimidation, and charm based on alignment…