He who goes through life without learning is a life wasted. Knowledge is power, without it man kind is nothing more than just another animal...

One of the first questions that many new players ask is “How do I level-up my character?” This becomes even more curious to the new player when the new player realizes that the character sheet does not have a spot for levels or experience points. That is because Legends of Nor'Ova does not use an experience based system. Instead, character growth and progression is tied to acquiring and improving skills.

The idea behind this is simple, simply hacking to death hordes of foes will not necessarily increase your character's understanding and ability. It doesn't matter how many enemies your character has slain if your character has learned nothing from it. Growth requires learning new skills and improving ones self. To better illustrate this idea, Legends of Nor'Ova uses a skill-based growth system where the only way you can grow is through the skills system. You do this by gaining character points. Character Points are points that you use to obtain new skills and spells, upgrade spells, and increase your character's stats. You get character points for using skills, successful stat checks, and at the end of your game session. Your GM may also reward character points for showing real use of skill to overcome obstacles.

1) The Importance of Acquiring Skills 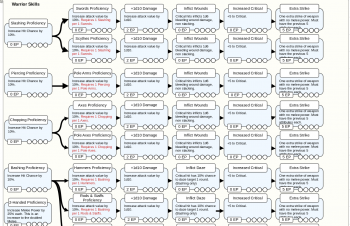 Warrior Skills on your character sheet

While it is possible to go throughout the game without acquiring a single skill, skills are the best way to improve your character. Skills improve your attacks by increasing the damage you can do, causing status effects, and giving you more attacks. Skills improve your ability to survive attacks by increasing your defense, allowing you to wear armor your profession normally doesn't allow, and allowing you to better handle status effects. Skills improve your use of magic, and allow you to craft items and the like. While skills don't tell you how you can attack or what you can do they improve on your abilities. Also the more skills you have and use at a time, the more character points you get which not only help you get more skills, but can also be used to increase your stats.

During Character Creation you would have created a character point pool to help you get your first set of skills. But how do you acquire more skills after that? Simple, by using and acquiring skills. Using will get you character points, and the more skills you use in a skill chain, and the higher that skill's level is, the more points you will get. Your character point rate will change depending upon your profession, and your Profession page will detail how this works for you, but it is simple. It star ts with your Mental stat and gives you a bonus based on how many in profession skills you have.

This is a non-attached skill. Nothing is attached before this skill or to the front of this skill. Therefore, you can acquire it without having other skills.

cost, which is halved if in your profession. In order to acquire a skill, it needs to be a skill that isn't linked to another skill by an arrow, or linked to a skill that you already possess.

When you get a skill you can use that skill. There is no need to roll to use a skill, unlike with spells. Instead, the skill might increase a stat check for you to roll.

Each level doubles the stat cost and the effect of the skill. For example, the skill Inflict Wounds inflicts 1d6 bleeding out damage per round until healed at the first level for 0 stat cost. At the second level this would be 2d6. Inflict Daze gives a 10% chance to daze the target for a round at the first level, but a 30% chance to daze for a round at the third level.  Since there is no rolling to use a skill, you don't fail to use the skill. You just apply its effects and costs.

In order to use a skill, you must have the skill and declare that you are using it. Meaning that if you want to use the 1d10 damage skill, you need to have it and say that you are using it. You would then apply the effect and stat cost. You also need to decide at which level you want to use the skill. Just because you have the skill all the way at its fourth level, it doesn't mean you have to use it at its fourth level. You might find it more beneficial to only use that skill at the second level, usually because you don't have enough SA or EP to do otherwise. Also skills don't tell you what your character is doing, they just give you the effect. You must describe what your character is doing.

Let's take a basic attack for example. Say you see an enemy, and you want to swing your sword at that enemy. Great! You say that and roll your Hit Chance to see if it goes above the target's Evade. All of this will be better described in the combat rules, of course. With skills, you can do just that, and add in Slashing Proficiency to increase your Hit Chance. The higher level of Slashing Proficiency you have and use, the higher of a chance you will have at hitting that target with your sword. As you may have noticed, Slashing Proficiency gives you a 10% increase to your Hit Chance. This is not a +10. Instead, it is what you rolled to hit increased by 10%. So if you rolled a 24 to hit, with this skill it will be a 27. If you have and use slashing proficiency at level 4, that would be a 40% chance, turning that 24 into a 34.

Skill Chains are a group of skills linked together by arrows and/or state that they can be used with other skills. In combat you get 1 chance to do each of the following type of actions: attack, move, support, defend, and magic. An attack action, for example is attacking once, and you can use a skill or skill chain with this attack. One example of a skill chain is in the warrior skills for slashing. If you have Slashing Proficiency, Swords Proficiency, +1d10 damage, Inflict Wounds, Increased Critical, and Extra Strike; then you can use all of these with your one attack action because it is a slashing attack skill chain. They are all connected together by arrows.

If you use that skill chain, you will get all of the effects of each skill on your one attack. You will also have to pay the total stat cost of all the skills, and remember these are doubled per skill level. So if all skills are at level 1, but you have all skills in that chain and decide to use them all, your Hit Chance increases by 10%, your attack value of your sword increases by 10% (again a percentage, not a +10), you add +1d10 to your total damage, you inflict 1d6 HP bleeding damage, have a +5 to your chance to crit, and get an extra strike that is weapon damage only (not increased by the previous skills since it is at the end of the chain). Your attack has just become more significant that it was without using this skill chain, but at a cost of 7 EP. Not terrible really.

Once you reach this part of character creation, you should be able to pick up skills for your character. You will be doing so by spending the Cost to Acquire for the skills you desire. All of the skills you can choose from are on your character sheet, divided by the different professions. They are also listed on each profession's page. On the profession's page, you will also find a more detailed description of each skill.

If the skill is in your character's profession, each cost is halved.

Before continuing on with picking your skills, lets first go over some of the terms that you will find. Lets start with skills.

The last thing worth mentioning is that magic spells are different from skills. You cannot use this information found here for spells. Please refer to the magic section for information on acquiring, using, and mastering spells.

The final topic of character growth in how to increase your character's stat points. Luckily, this is very easy. You spend character points. The rate is 10 to 1.

You cannot increase your stat points beyond your character's race maximum. That really is the only restriction.