Now we will be dealing with magic. Although magic is used and obtained like skills and is a part of the skills system, due to it’s complexity, differences, and overall size, magic was given its own sub-section. Here we will focus only on magic, how magic works with the skills system, and list the many different magic spells available.

1) The Fundamentals of Magic

2) What Are Minor Elemental Manipulations?

Minor Elemental Manipulations is quickly manipulating your element to produce a weak magical effect. There may be instances when you do not want to cast a full magic spell, like say you want to light a camp fire or a torch. If your character’s runic element is fire, you would have access to massive fire spells, but all of them would be too costly and too powerful to just light a simple torch or camp fire. You would be more likely to catch yourself or your friends on fire. Instead, this would be a great time to make a minor elemental manipulation. With very small effort your character could pull just enough fire from your element to light the camp fire or torch. The best part of it all is that minor elemental manipulations are so quick and easy to do that they don’t use any of your battle actions. So lighting that torch didn’t slow you down in the least bit. Also anyone can make a minor elemental manipulation, even if they don’t have a single spell. This is because everyone is born under a runic element and everyone has that natural potential to use magic.

2.1) How to Use Minor Elemental Manipulations

So you may be thinking, what are the limits to minor elemental manipulations, if there are any? There are some restrictions that you will need to keep in mind, and they are all listed below.

One feature that you have with minor elemental manipulation that you do not have with traditional spells is that their effects can be made to last longer than just for an instant. In other words, they can be sustained. All you would need to do to keep up the manipulation’s effects is to continuously pump in SA points. You will need to pump in half of the points that you used to create the effect for every round or minute you want the effect to last. So if you used 10 SA to create the effect you will need to spend 5 SA for every round or minute you keep up the effect.

Lets say your character’s runic element is fire. You walk into a pitch black room and realize that you have no lantern or torch. No worries, with a minor elemental manipulation, you can create a small glowing ember that gives off a small glow lighting up the area around you. But keeping that glow up for a second isn’t going to help you navigate the dark room, so you decide to keep the glowing ember within the palm of your hand, spending a small amount of SA for each minute that you need the light for. 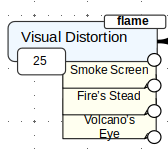 This is the Spell Sheet for your character sheet. Each spell block is formated for you to record up to 4 levels of the spell with their own information and Success Rates, and has the 4 bubbles to check off.

You would gain magic spells similar to how you gain skills. In order to acquire a spell, you must spend character points. The amount of character points you must spend depends on the spell's cost. In order to acquire a spell, it needs to be a spell that isn't linked to another spell by an arrow, or linked to a spell that you already possess, and it must be in your runic element.

In order to acquire a spell's second level, you need to have acquired all of the other spells at level 1 in the spell chain. If the spell chain splits into multiple paths, you simply need to acquire them in the path that contains the spell you wish to move to level 2. You do not have to acquire them in all the diverted paths at level 1 to move to the next level. You can only increase a spell's level to the next level if the spell before it in the chain is already at that level. You cannot for example, have the third spell in the chain at level 3 while the second is at level 2 and the first at level 1. The first two must also be at level 3. To progress to the next spell level, the previous spell level must also be at its maximum mastery.

Your runic element is simply the elemental sphere that you are connected to through your runic soul. If you are born under the runic element of fire, then you can access any fire magic spell.

Your runic affinity is which part of the runic element you are stronger connected to. For example, if you have the runic element of fire, you will have an affinity to either flame or light. If your affinity is to flame, then you only have to pay the basic character point cost for that spell, the cost that is listed on the spell tree. Otherwise, you will pay double that cost. Also you will only be able to perform quick manipulations of the flame affinity of your element.

4.2) Learning A Spell Through Rune Stones

You can of course learn magic through rune stones. There is a unique advantage to doing so, mainly that you can learn a spell from any element that you are not weak against. So if you are of the fire element you could not learn any water magic, even with a rune stone, however you could learn air magic. You would pay double the listed character point cost if the spell isn't of your affinity, of course.

Learning other elemental magic can of course make you quite the powerful wizard indeed, however it is not the only advantage. It also decreases the character point costs of any spell in your runic element by 25%! So if you were of the runic element of fire, with the flame affinity, you could learn Visual Distortion for 19 character points instead of 25!

You also need to decide at which level you want to use the spell. Just because you have the spell all the way at its fourth level, it doesn't mean you have to use it at its fourth level. You might find it more beneficial to only use that spell at the second level, usually because you don't have enough SA or EP to do otherwise. However, if you want to use the spell at a higher level, you will have a lower chance to do so. For example, the level 4 of Sharp Fire, Magma Shot, has a success rate of 55 meaning that you would need to roll 55 or below to use it which is not an easy task. If you do make that roll, you get to use the spell at Level 4, containing the effects of the 3 previous levels as well. If you do not succeed however, but roll a 70, you get to use the level 2 Plasma Shot with Sharp Fire, so while you didn't use the level 4 spell, you still get to cast a spell. The catch here is that you will still apply the stat cost of the level 4 spell.

You can choose to only use a certain level of the spell. Lets say you want to use the level 3 spell of Sharp Fire, Fire Blast. You would declare that. In that case, if you roll 65 or below you will use Fire Blast and only Fire Blast. You would not include the effects of the previous two levels. However, if you fail at that roll, you would not use any magic at all. The benefit of doing this is that you get to decrease the stat cost of the spell by 5 for each level you do not use below the level of spell you are casting. Or if you only wanted to cast the level 1 spell, you won't have to worry about the cost or effects of the higher levels.

Above is an example of reading a spell on the spell table for your elemental magic page. It lists the basics of each level as well as any other basic information, and the success rates and character point costs of each level. If you want more information, you'll need to click on the blue spell name which will take you to the detailed page of the spell. 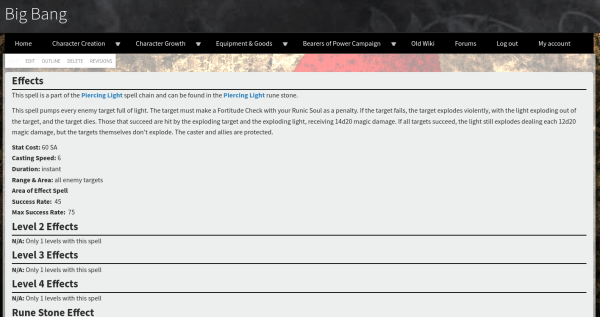 Unlike with skills, you do not get to chain together all of the spells of a spell chain. This is because while skills aren't self contained, spells are. Your spell levels are more like a spell chain in this sense. So when you cast a level 4 Sharp Fire, Magma Shot, you also cast Level 3 Fire Blast, Level 2 Plasma Shot, and Level 1 Sharp Fire. You need to pay attention to the spell however to apply the spell effects in the correct order as some spells dictate in which order they actually are applied.

5.1) Using Spells From the Rune Stone

As stated before, you can also use spells that are in rune stones. It is how you will learn those spells that you may not normally have access to. As long as the rune stone is equipped on your character, you can use the spells within them.

½ of the spells stat cost will come from your character. The other half is drained from the stone. Once that stone runs out of SA, it looses everything in it and becomes a normal ylem stone. Therefore you’ll need to be careful. Remember, you can only charge it if it is your element!

The spell’s casting speed is dependent upon your character only.

The rune stone will at the very least hold the level 1 of every spell in that rune stone. For example, the Visual Distortion rune stone will have Visual Distortion, Super Heat, Heat Control, Children of Fire, Heated Touch, Fire's Punishment, and Fire's Illusion. The levels of each spell within the stone will depend on the stone's purity. The other spells will not open until you have acquired the previous spell connected to it, but you are not required to have mastered that previous spell. You would only need to master it if you want to go to the next spell level.

More on using Rune Stones will be discussed in Rune Stones, Anima Stones, and Enchanting page.